This weekend was the inaugural Spitfire Scramble 24hr running event that took place at the Hornchurch Country Park in on the Essex / London border.  It is a multi-terrain relay or solo race for teams of up to 8 run on a 5.8 mile course around the Country Park.  You can find out all the details on their website at www.spritfirescramble.co.uk where you can also register your interest in the 2015.  I went along this morning to support the runners and take some photos.

If you are here just for the photographs then here’s the link to my online gallery.  The photos are free of charge and copyright free for personal use however I would appreciate credit for them as appropriate.  Those in the gallery are low res max dims 1600 px.  I will happily email you any high res versions if you tell me which ones by email to noynek99@gmail.com.  There is no charge however if you wanted to donate a modest amount to charity for getting (pretty good I think) photos of your running then sponsor me a little for my recent RideLondon cycle that I did a couple of weekends ago here https://www.justgiving.com/Noynek-RLS2014/. No biggie if you don’t want to.

Back to the blog…

Oh and the mosaics of photos open to bigger versions in a gallery view if you click them….

I wanted to go and photograph partly as I did so for the recent HARP24 race in Southend where I was the ‘official’ photographer and I thoroughly enjoyed it and partly to support French marathon runner Valerie Bloomfield who I know through running and online communities.  I had wanted to go on Saturday for the start but unfortunately had another previous engagement.

So I set the alarm to 04:00 hrs and managed to get to the country park around 05:30 in pitch darkness in time for the sunrise at 06:10.  I made my way over to the the finish area and tried snapping a few runners with the flash before deciding it wasn’t the most scenic of locations.  At this point I should ask if people mind the flash going off while running past in the dark.  I always do a flash (camera) before a runner gets to me so they know to expect it.  Does it kill your night vision?

Anyway I decided to walk the route in the reverse direction which I knew would take a while (over 3 hours in fact) and take photos on the way.  I’m really glad I did as I got some great ones.  I had only just started when who should come trotting out of the gloom bu Valerie with her ever present smile leading the way.  She stopped for a chat and at this point she had already completed 75 miles which beat her HARP24 PB of 70 ish miles.  This made me very happy.

The first mile or so of my walk (the last mile or so of the course) was firstly through some wooded areas with a bridge over the river then up onto and across fields.  After that the route was in the country park proper and followed a combination of cinder tracks and tarmacked paths.  I found it hard to get the expose right on the camera in manual mode with the flash but using the miracle of Adobe Lightroom I was able to adjust the exposure.  I was really pleased with the sunrise photos a few of which I have included below.

One of my first night shots

Up the track by the hedge

Across the fields at sunrise 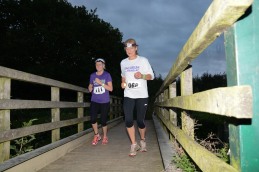 Night running in the woods

Once over a couple of styles the cinder path continued up and around until it crossed back over the river on a big steel bridge.  I snapped away on that stretch and glimpsed a Barn Owl on the wing at one point.  I will have to come back again and see if I can properly photograph said owl.  Once over the bridge the path became tarmac and I arrived at Marshall point 5 where I chatted to a chap for a bit.  He had already done a couple of laps and was due to do some more.  Soon after leaving there I bumped into Valerie again and we had another chat.  It was then tarmac path pretty much all the way to Marshall point 4 near the lake.

Barn owl disappearing into the gloom

Thumbs up from Becs

Lovely smile. Everyone was smiling in this event (in my photos anyway)

Over the river again

Wahay its Valerie again. I must walk faster!

Another great smile. Its catching 🙂

After a short chat with the Marshall who advised that some good photos could be had from the top of the hill I continued on my way passing around the edge of a field which pretty quickly brought me out at Marshall Point 3 that was manned at that time by two chatty young ladies.

We chatted for a bit while a few runners came and went before it was again time to move on.  It was getting brighter and warmer all the time and I was beginning to get warm.  From here the route followed a cinder path for a good mile or more.  At the far south end of the Country Park the path went to the top of the Ingrebourne Hill where the views over London were really great.  It also noticed the mountain bike trails which looked fun.  The path then descended the hill and passed by a lake before turning sharp right and heading north for the run in (out) to (from) the finish (start).  Getting confused now!

Like this photo – composition and depth of field (no pun intended)

One of Ford Motor Company’s windmills – and Mr 118 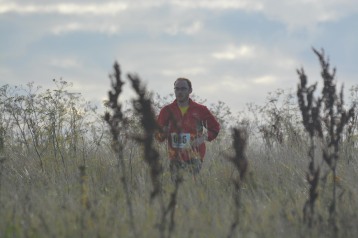 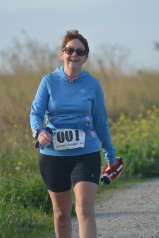 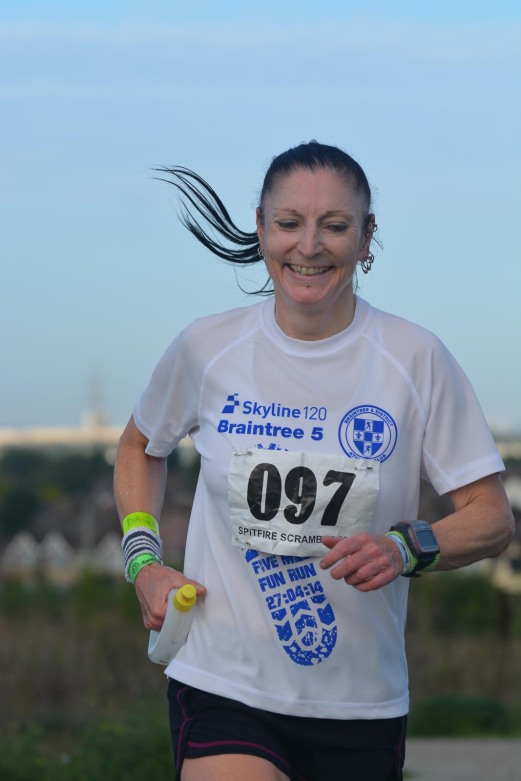 Another lovely smile – everyone is enjoying it so much!

As I was heading back along the cinder path I came upon cannicross lady Liz Smith whose gorgeous huskies seem to have spotted a rabbit and were trying to drag her off into the long grass.  Made me laugh that did! Not long after I again bumped into Valerie who was running with a partner for company and we again said hi.   There was then a sharp right onto a short section of tarmacked track before passing by the lake again and a short stretch in the woods.

Liz heading for the long grass!

Its Valerie again! plus running partner.