ICE Ambassadors recently supported the Colchester Careers Convention that was held at the Weston Homes Community Stadium in Colchester.  As part of that event we demonstrated some bridge design software for the home and did a load test to destruction on a paper bridge.

As part of the Careers Convention (a blog entry about the main event can be found here) we were asked to do a 20 minute talk or demonstration that was to be held in one of the private boxes on the second floor.  We agreed to do one and we decided to go with a demonstration of the excellent West Point Bridge Designer software. I recently blogged about preparing for this demonstration and you can read that entry here.

After a brief introduction to civil engineering and some photos of some well known and less well known bridges, I demonstrated the West Point Bridge software and used it to ‘design’ a lattice girder arch bridge.  The design was then brought to life in the model bridge that I had previously made from paper tubes, paper fasteners and nuts and bolts.  Making the model was made considerably easier using the design from West Point Bridge which gave all the member lengths.

An album of photos of the Careers Convention can be found on my Picasaweb photo sharing website here.  A selection of photos from the bridge loading and its ultimate collapse are included below.  All photos open on clicking to a bigger version in a new window.

The bridge finally failed under an equivalent loading of 98 standard sized mars bars loaded at the centre of the span.  This equated to a load of  5.7kg.  We didn’t actually have 98 mars bars so we used some measured packs of New Civil Engineer magazines plus 35 actual mars bars we had plus some extra careers brochures pinched from the Architectural Technologist stand.

The bridge would actually have taken more loading had it not failed latterally due to a design flaw in the cross bracing. The cross braces were connected with paper fasteners due to a shortage of nuts and bolts and these fasteners allowed movement at the connection.  That, combined with only putting cross braces in one direction allowed the structure to displace sideways.  This ultimately led to premature collapse.

If you look at the series of photos below you can see the first bottom joint from the right had side displacing toward the camera due to failure of the cross brace in that location.  Just shows – if you cut corners with the construction of your structure – unexpected and catastrophic effects can result.

A series of photos below were taken from the video of the load test.  We were ably assisted in the load testing by brothers Max and Glen Hastings of St Benedict’s Catholic College in Colchester.  Many thanks guys and hope you enjoyed the Mars bars

A series of stills taken from a video of the final loading and eventual collapse. 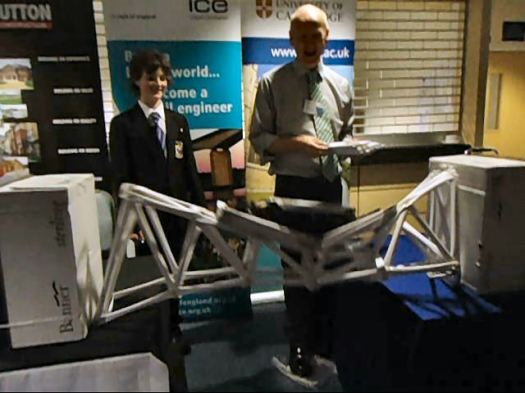 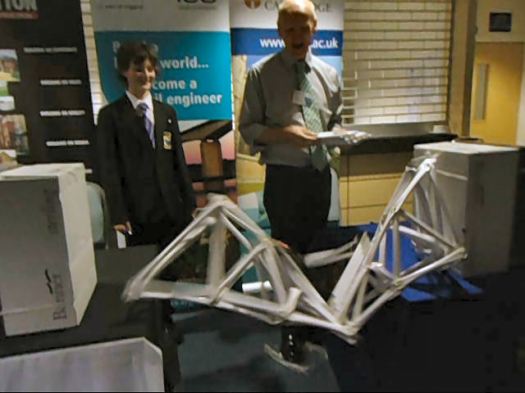 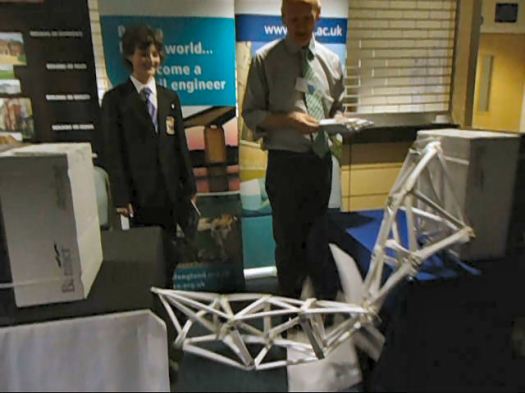