Simple Minds rocked the Southend Cliffs Pavilion last night and they were brill – far better than when we last saw them in Southend 4 or 5 years ago.  Carry on reading for a brief review, some photos and vids.

Doors opened at 7:30.  We arrived at 7:45 and queued to get our obligatory wristband as we were in the standing area.  We got in at 7:50.  The band came on at 8:00.  This I liked as one thing I dislike about most gigs these days is how long the band keeps us waiting before they come on.  I heard through wifey that a friend who went was still in the pub at 8:45 thinking it would be at least 9:00 before they came on. as was somewhat annoyed to find that not so.

The audience – as expected – was mostly 40 something men in fading 80’s tee shirts making a good view rather difficult.  A few 40 something women were also there.  The venue looked pretty much full.

There was no support – they just launched into a decent length set playing a selection of old and new songs – some of which I have to admit to not knowing – and finally left the stage at around 10:30 having had a 20 min break for a sit down in the middle and nipping out again for a pee before an encore of 4 songs.

They opened the show with Broken Glass Park and the sound was very loud and the voices a wee bit drowned and the audience reaction was a little muted.  I did wonder for a minute if it was going to be like the last time we saw them when the levels were all wrong and the music really drowned out the voices – but these fears were unfounded and things got better as time went on.

Next up was Waterfront followed by Once Upon a Time and then Up on the Catwalk which really got the crowd in the mood and singing their lungs out.  Frontman Jim Kerr may be older and more portly but he still has the moves and the voice.  Hitting some of the high notes was a bit of a problem so he had the excellent Sarah Brown backing him up which worked really well.

The stage setup and lighting was excellent even though a relatively small venue.  The whole of the back of the stage was a lighting rig which threw beams onto the stage and into the crowd and gave a mini stadium feel.  The sound was suitably loud – a bit too loud if I’m honest but that’s probably just me getting old.

A few more hits followed plus a couple of songs I didn’t know – probably new ones – and we were into the interval.  We stayed put and moved forward a bit whilst others went and stocked up on beer.  That’s another thing I don’t care for at gigs nowadays – so much beer in peoples hands in the venue.

The second half started with an instrumental that I’ve since found out was Book of Brilliant Things and a track showcasing backing singer Sarah Browns considerable talents. Jimbo was then back on the stage and the band launched into Someone Somewhere in Summertime that got wifey (and everyone else) bouncing (one of her faves) and this was followed up with She’s a River and a few tracks I didn’t know.

See the Light, Don’t you Forget About Me, and Promised You a Miracle let us to the end of the second half and after a short break with the obligatory chanting and clapping they were back for an encore of 4 songs including Sanctify Yourself and culminating in perhaps thier best know song Alive and Kicking.  I was expecting (hopeful I suppose) that they would fit in Ghost Dancing but alas no.

Someone Somewhere in Summertime

All in all it was a pretty fine gig by a quality 80’s band who still have it and who are very much alive and kicking.

My photos and vids were not brilliant due to the limitations of being taken on my phone but I’ve included some of the better ones below with a whole album of them online here.

I shall now sit and watch my Verona DVD for the umpteenth time. 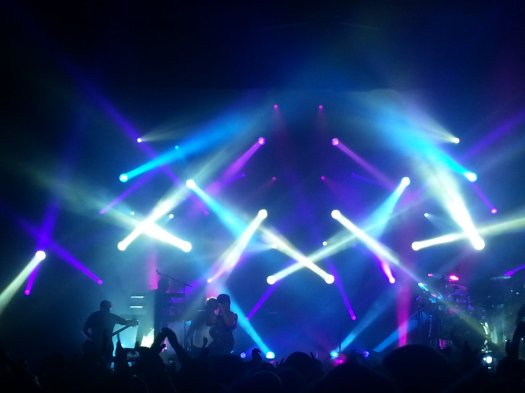