Just a quick blog about seeing PSB on Friday last.  We were at the O2 Greenwich (The Dome) to see Kaiser Chiefs in concert (review to follow) and I was really pleased to find out that Public Service Broadcasting were supporting along with Teleman (who we missed unfortunately).  I’ve heard PSB a fair bit over the last few weeks on BBC 6Music and I like them a lot.

I wasn’t entirely sure how the set would work as they are a performance act band rather than a trad band as they play music along to archive audio and video clips but I thought it worked really well.  There were 2 main guys playing laptops and generally waving their arms about, a drummer and guitarist, plus 2 or 3 sundry brass players who came on for a few songs. 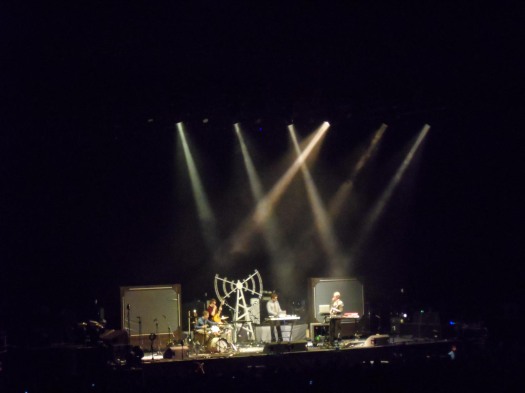 I don’t now much of their work but I knew Gagarin as it has had plenty of airtime on the radio and I also knew Spitfire which they finished with.  They played 6 or 8 tracks in total and I loved that they ‘interacted’ with the audience through pre-recorded sound segments which were highly amusing.  I cannot find a set list but will add one in due course when I find it.

I loved every track played and thought the staging was great with the trademark(?) radio antenna taking centre stage.  All in all an excellent supporting set and I am keen to see them again maybe headlining their own gig. 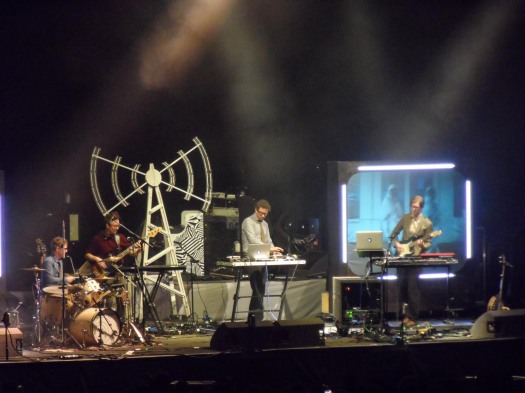 Oh – and the new album The Race For Space is out in the next few days which I shall definitely be getting along with some back catalogue LP’s.

I took a few photos which came out quite well plus a pretty decent video of most of Spitfire which I’ve included below.  A few more photos on Google+ here.

I’ll add the playlist when I get it.