A few words, pictures and videos about my experience of Village Green 2013 in Chalkwell park last Saturday 13th July.  Village Green is a free music, arts and craft festival held in Chalkwell Park in Southend and organised by MetalCulture.  It was a fantastic day on one of the hottest days of the year and with the exception of the headline act of Sam Duckworth all the music I listened to was by artists I have never heard of before.  I loved 99% of the music I heard and came away with a few CD’s, loads of photos and some brilliant memories. 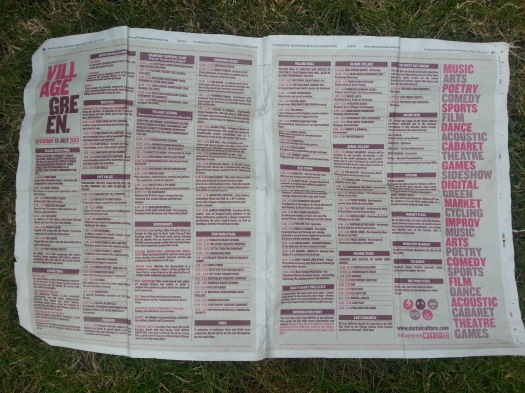 Myself and the lad arrived shortly after noon on our bikes and got into the park without any problems or queuing. This was a relief as twitter was reporting that the might stop admitting entry even if you had a wristband once the park was full.  This did happen later but not when we turned up.

First thing to catch our eye was an escape artist in chains and a tennis racket who we watched escape (as you would expect). We then wandered over to the Village School stage and caught the last song from (I think) The Coller who sounded pretty good.

Wandering back toward our designated meeting place to find wifey and daughter we took time out to watch a demo by the Parkour boys who were pretty good.  We often see youngsters leaping over the sea wall in various different ways so Parkour is alive and kicking in Southend and this demo was being watched by a decent crowd.  We sat on the grass and watched for 15 mins or so.

Wifey and daughter arrived and took the lad off to get a burger.  I slipped into the Cafe Valise stage and caught the end of a great set by Kevin Pearce aka @PearceMelodies.  Kevin’s music was just brilliant and I afterwards I told him so and bought one of his CD’s – Pocket Handkerchief Lane – which has been one of my favorite LP’s of the year.  Later in the year I bought his latest LP – Mathew Hopkins and the Wormhole – which is equally brilliant.  Village Green was worth attending just to discover Kevin tbh.  More photos of Kevin.

We met up again and wandered a bit looking at all the craft stalls. Walking up the main path my eye or more correctly my ear was caught by the Prairie Stage and the band Ankura who were in mid set. I lingered awhile a caught a couple of songs before they finished.  A decent sound in keeping with the look which fitted the stage well.  A good package I thought. More photos of Ankura.

Caching up with the others again we ambled on and past the main Village Green Stage where the Fifty-Four Plates were just finishing their set and over into the far filed where the Aerial Village was located.

Here we spent awhile playing in the area where Connections(?) had loads of plastic plumbing pipe lying about and lots of connections and bends so you could make lots of interesting plastic pipey things.  I made an octagonal hula-hoop (as you do) which didn’t work very well and promptly fell apart with the bits flying everywhere – bouncing off a small child in the process (whoops). Small child pacified we carried on and I stuck my nose in the Sundown Tent and caught some chap making strange noises.  I didn’t stop long.

We stopped awhile under the willows and had some grub before moving on.

At this point Wifey and kids decided to head home but having enjoyed Kevin Pearce in the Cafe Valise stage I decided to return and listen to some more of the artists playing there – and very glad I was too.  I spent most of the rest of the afternoon there.

First up was Grace Petrie aka @GracePetrie who could (probably wrongly) be described as a modern day female Billy Bragg singing mainly protest songs.  Sung with real feeling and brilliant with it.  I spent my last pennies on one of her CD’s too after her set.  More photos of Grace.   Click for a recent video of Grace playing live a song that she played at Village Green.

Next up was Annie Rew-Shaw aka @annierewshaw who popped up a few times throughout the rest of the day as she was friends with local lad Sam Duckworth… Annie two was brilliant although she was rather drowned out by the noise outside the tent. More photos of Annie.

The imposing Ed Rome was up next with lots of foot tapping (stamping) and acrobatics.  The footstomping was so violent that the roadie had to keep moving the amp back onto the stage as it kept making a break for freedom.  A great set. More photos of Ed.

Last up in the Cafe Valise tent (that I watched anyway) were Hoodlums frontman Lou Vainglorious and guest who were brilliant too going full tilt with a pair of acoustic guitars. More photos of Lou.  and click for a recent Youtube video.

It was then time to head to the Village School Stage to get a spot at the front to watch the headline act later that was Sam Duckworth (friend of the family – we live in the house he grew up in etc etc). I arrived just as Sweet Billy Pilgrim were starting there set so I stayed and watched.  Now I’d not heard of these guys before but they were brilliant and a real revelation.  I have since bought the excellent LP Crown and Treaty which deserves the rave reviews it has had.

Annie Rew-Shaw and Sam came out after a bit and sang backing vocals for them which was a nice touch too.  Loads more photos of SBP and friends.

Spookily as I was stood watching the set a chap tapped me on the shoulder and asked if I was Andy and said he recognised me from my twitter profile picture.  I forget now who it was but were were following each other and chatting occasionally.  That was nice 🙂

Now the next act wasn’t quite my cup of tea – and sitting here writing this in December I can’t even remember his name – Oh well.  I do recall he was getting rather a lot of abuse from someone behind me and to the right.

And so we came to the headline act of the day – Sam Duckworth aka @ForgetCape playing under his proper name having dropped (I think) the band name of Get Cape Wear Cape Fly.  We have known Sam since he was knee high and still see his parents regularly.  We actually bought their house 20 odd years ago when Sam must have been 7 or 8 years old – ah bless.

Sam and friends played a great set starting off just as his band plus special guest of his dad Lloyd – who is none too shabby on the old guitar – before being joined by the Sweet Billy Pilgrim boys and girls and Annie Rew-Shaw.  By the end it was just one big party.  Needless to say I took loads of photos and you can find them here plus scroll down for a video.

The only downer of the set was that Sam had one of guitars nicked after the show which was a tad annoying.  I don’t know if he ever got it back.  Unlikely I guess.

And that was it for another year.  The event is free to attend but can only be put on by the fundraising efforts of Metal Southend.  To make sure it happens again in 2014 visit their website here and follow the instructions to donate towards the cost.  For every £1 donated they £1 matched donation from Arts Council England. SO DONATE NOW.